Next month I’m curating a group show of printmakers in the Maurice Del Mue Galleries at the San Geronimo Valley Community Center entitled Pressing Matters: Printmakers Group Show. This will be the second annual Pressing Matters.
One of the highlights of last year's show was a special exhibition of three generations of printmakers: Leon, Lawrence and Zach Gilmour.
I interviewed Lawrence and Zach at the time of the exhibit. Portions of the article below originally appeared in the newspaper Stone Soup.
﻿

Leon Gilmour, born in Lativa in 1907, came to the United States in 1916 and did various jobs including working as a ranch hand, construction worker and gold miner while continuing his art studies. He studied at the School of Practical Art and the Otis Art Institute.
﻿ ﻿
Leon Gilmour’s remarkable wood engravings are in the Achenbach collection of the Palace of the Legion of Honor and the Smithsonian Institution and numerous private collections. In 2009, his work was featured in the California in Relief  print exhibit at the Hearst Art Gallery, St. Mary’s College. Leon Gilmour died in 1996.
Leon’s son, Lawrence Gilmour, is a Marin county artist who has had numerous local exhibits including work at the Falkirk Cultural Center and the College of Marin. His first forays in printmaking began in the early 1970’s.
Zach Gilmour, a Forest Knolls resident, has taught printmaking at the Marin School of the Arts. He has exhibited at the Kala Art Institute, Artisans Gallery and the College of Marin.

Did you watch –or assist--your father making prints?
Lawrence: Yes, I saw my father working on his blocks from the early 1940's on until the end of his life.
In the early years I did not see him print as he did not have his own press. Later, in the 1970's and 80's even into the 90's, he printed on an old proof press in his garage down in Burlingame CA.
I never assisted my father until very late in his life, when his back began to prevent him from cranking his stubborn old press.
You’ve made etchings and monotypes. When did you begin making prints?
Lawrence: I started making prints during the 1970's. There was a renewed interest in printmaking at that time and I was given an opportunity to learn etching.
Leon Gilmour worked with the WPA in the style associated with social realism. How would you describe your work?
Lawrence: Leon was also inspired by his love for the High Sierras. He approached nature with an analytic as well as poetic sensibility.
As far as my work goes, I have not been as overtly political in my work as my father was, but there are undercurrents of political and philosophical issues in much of my imagery. I am experimental in much of my work and have not worked to establish a strong personal style; although themes and attitudes repeat throughout my work.
Zach Gilmour
You were a baker and graduate of the California Culinary Academy before you turned to art.  What caused this change in direction in your life?
Zach: Well, in truth I have always made art and never stopped. However, when I was working as a baker and commuting from Mill Valley to Sonoma each day, I found myself drawn to the ever-changing landscape I would drive past. It made me want to make art to find a way to capture it. Not long after that I happened to visit the San Francisco Art Institute, and it felt like a good place to be. So I decided I needed to go back to school to study printmaking more seriously.
Both you and your father have made a form of print know as a monotype.  Can you describe a monotype—and how it might differ from a monoprint?
Zach: Monotypes are made by applying ink to a plate that is smooth, traditionally copper, but most people now use plexiglass. Then paper is laid over the plate and pressure is applied to create a one of a kind image. Monoprints on the other hand use a plate that is not smooth. The plate will have some sort of element, usually etched lines. And though the ink is applied in a unique way, that one part of the image will show up the same each time.
I asked these questions of both Lawrence and Zach:
﻿

What is it about printmaking—why not painting or sculpture?
Lawrence: Printmaking is a natural extension of drawing, which is the core of my practice as an artist. However, I do paint, and currently I am making ceramic sculptures as well.
Zach: There’s something about the process of printmaking that forces you to step away from your work as you make it. When you put the paper on the plate or block and put it through the press there is a level of unknown 'until you lift the paper back up and see the result. That interaction of hand, ink, plate, paper and pressure just works for me better than anything else.
What artists or artworks have influenced your work?
Lawrence:  All the great draughtsmen, from the prehistoric animal drawing masters to the generation just ahead of my own; Rivers, Kitaj, Baskin, Jim Dine, Oldenburg, and the masters of sequential art, that would be comic book artists. Moebius was particularly influential during the late 70's and early 80's.
Zach: Sort of a random group: Russell Chatham, Nathan Oliveira, Egon Schiele, Degas, and right now the person's work that inspires me a great deal is a local painter named Kristen Garneau. Lastly, both my parents have been the most influential as I have grown up watching them work.
Where did you receive your training?
Lawrence: At the Art Center College of Design. I now take ceramic classes at College of Marin
Zach: The San Francisco Art Institute and the California College of Arts and Crafts.
Is it true all three generations of Gilmours have used the same press?
Lawrence:  No. My father's press was a proof-press used by typographers in the age of hand-set metal type. His wood engravings were done on type-high blocks of boxwood and locked up on the press bed for inking and printing.
Zach: Though we still do have that press in storage, we just have not had the place/room to set it up.
Lawrence: Zach and I do share the etching press that I bought in the 1970's. That press is now in Zach's studio in Forest Knolls.
Interview by Larry Rippee

Photos and images courtesy of the Gilmour family
Posted by Larry Rippee and Molly Rea at 8:10 PM No comments:

Every year, the San Geronimo Valley Community Center (where I work) hosts the debut of a new play by the San Francisco Mime Troupe.

Founded in 1959, the SF Mime Troupe has been offering political satire performed in the tradition of commedia dell’arte  for free in public parks around the country. (By the way, they do not do pantomime
a la Marcel Marceau-- they, in fact, tend to be very vocal).


Backstage: everyone, including actors, unloads the truck and construct the sets.
The play this season is 2012: The Musical –described as a musical satire about corporate funding and the “art of mass distraction”.

Typically we get the rough draft version, sometimes the sets aren’t finished. Sometimes, as this year, the play isn’t even finished. They perform up to a point and then turn to the audience and say “That’s all we have for now”.
The performers then usually chat with members of the audience about the play—listening to critiques and suggestions.

﻿﻿﻿
﻿﻿
2012: The Musical   is indeed very funny and I’m now anxious to see the conclusion.  I’ll have to wait until at least July 2nd when it opens at Dolores Park in San Francisco.
Here's the poster by Spain Rodriguez.

(As always, click on thumbnails to enlarge)
Posted by Larry Rippee and Molly Rea at 9:26 PM No comments:

I make block prints from linoleum from time to time (never as often as I’d like).
Here’s how I put together my latest printmaking project:
I wanted to do a print based on a dream I had some years ago. 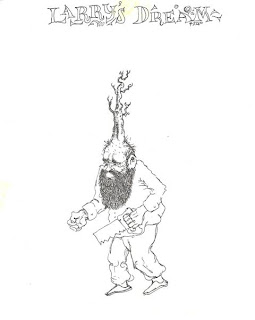 I used the original sketchbook drawing and added new elements (based on another dream !) 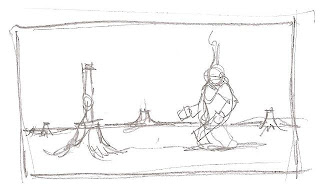 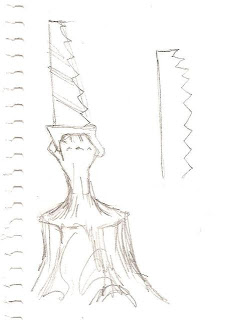 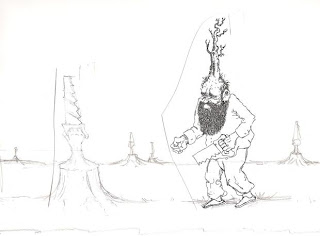 I traced the new composite drawing. 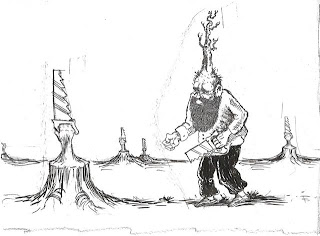 I transferred the tracing to a sheet of battleship linoleum–reversing the image. 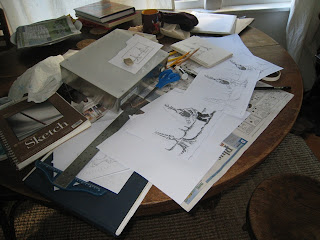 Then I cut the block. 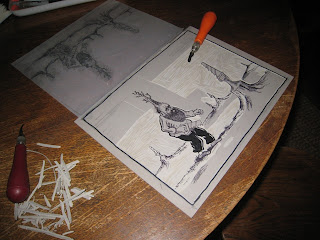 I tend to print by hand rubbing with a soup spoon and a baren. 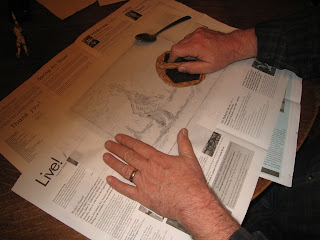 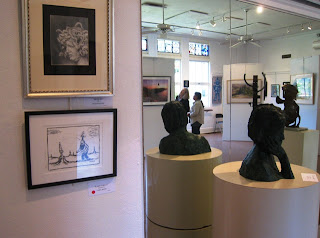 Posted by Larry Rippee and Molly Rea at 3:57 PM No comments: